Who Is 'Idiot' In Idiotbox ? 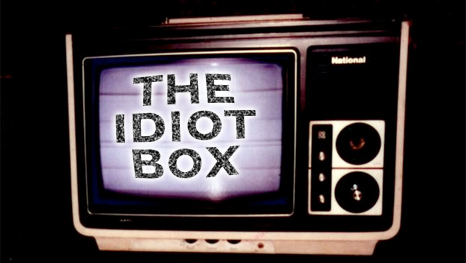 This question has always tugged at my brain. Why do people refer to a TV as an idiotbox? Is the TV filled with images of idiots? Or, is the person watching the TV an idiot?

Who, first, is an idiot? I like the way Wikipedia defines the term - “An idiot, dolt, dullard or (archaically) mome is a person perceived to be lacking intelligence, or someone who acts in a self-defeating or significantly counterproductive way.

A dunce is an idiot who is specifically incapable of learning. An idiot differs from a fool and anignoramus, neither of which refers to someone with low intelligence.”Clearly, idiocy involves having a low intelligence and acting in a counterproductive way.

Back to the first question - Is the TV filled with images of idiots? This has to be a big NO, in a very obvious manner. The people involved in creating the TV programmes are very intelligent and very rich …so they are definitely successful people, hence no idiots (their activities involve intelligence and are very productive to them)

Then the next question - is the person watching the TV an idiot? This must be the case as the first question was answered in a negative. But TV is supposed to be a window to the world, showing us the wonderful works of art and music, the great advances in science, the enlightening tidbits of history and the beautiful creations of nature.Surely, a regular TV viewer should be more intelligent. So what is missing?

Well, we are trying to define intelligence to mean having information, some relevant and most irrelevant. But how much original thinking does TV viewing promote? And how productive is the activity? The answer to these questions makes it clear that a regular (rather, addicted) TV viewer is an idiot. Where is the chance to think when we are trying to assimilate other’s thoughts? There isn’t any. And once you get addicted to TV viewing, where is the time to put the information gained into productive use? There isn’t any. So, who is the idiot now? I am, if I spend hours watching the TV, the Idiotbox!